Celebrating the sound of success 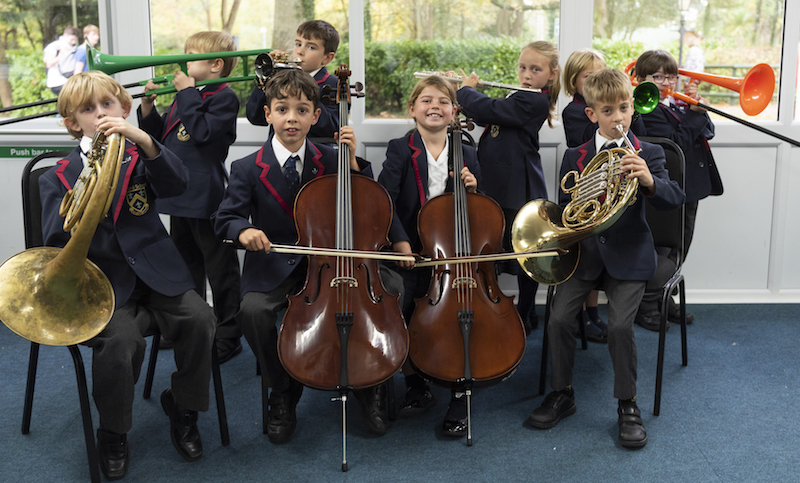 Andrew McCleave, Headmaster of Ballard School, is delighted to hear pupils express themselves through music.

“Music has a power of forming the character and should therefore be introduced into the education of the young.”
(Aristotle)

At Ballard we firmly believe in the universal benefits of a strong music education; in contributing to academic success, developing self-confidence, building vital skills such as teamwork, commitment and discipline, enabling lifelong hobbies, making memories and having fun!

The benefits of a holistic education are well-known; the educational advantages gained and the positive impact on children’s development of studying music, in particular, have been well-documented. In 2011, the Department for Education acknowledged this, publishing a national plan for music education. Nine years later, with continued funding cuts across the maintained sector, it is independent schools that are leading the way.

All pupils at Ballard are encouraged to participate in music lessons and activities and learn to play an instrument. Our children have lessons with specialist staff from Reception and gain access to a range of orchestral instruments during Years 3, 4 and 5 with our Instrumental Starter Scheme. Each child is paired up with an instrument that both suits their own physicality and inspires them. They receive a term of individual one-to-one lessons and the loan of the instrument. The scheme has proved to be a huge success with many pupils choosing to continue with their individual lessons after their trial period.

“The Starter Scheme has worked brilliantly: George was able to try a variety of instruments, make a free choice and brought home a French horn! Brilliant for him to really ‘own’ his choice of instrument as it meant that he was super-keen from the start. We quickly moved to the next step of buying him his own instrument and continuing with lessons at school – which he adores. I would never have suggested the horn but am completely delighted that he is so in love with it!” (Parent)

Research shows that learning an instrument from an early age enables children to progress more rapidly than peers in many areas: auditory discrimination, IQ scores and executive functioning (which enables you to quickly process and retain information, regulate behaviour, make good choices, solve problems, plan and adjust to changing demands). Other benefits include: improved work strategies/practices, motivation and a sense of self-worth through being involved in bands, choirs and orchestras, as well as developing important collaborative skills. Many of these developments are generic, providing pupils with skills which translate into improved academic performance and higher examination grades.

In Liisa Henriksson-Macaulay’s The Music Miracle, studying music before the age of seven is linked to the development of larger vocabularies, a more acute sense of grammar and a higher verbal IQ, both in their own and foreign languages. It boosts the ability to process subtle differences between sounds and assists in the pronunciation of languages. Researchers have found that adults who had musical training in childhood still retain an ability to learn foreign languages quicker and more efficiently than others.

In 2014, Boston Children’s Hospital used MRI brain imaging to reveal a possible biological link between early music training and improved executive functioning. Nadine Gaab, the lead researcher, commented, “Since executive functioning is a strong predictor of academic achievement, even more than IQ, we think our findings have strong educational implications. Musical training may actually help to set up children for a better academic future.”

Also in 2014, Kansas University showed that pupils engaged in music outperformed their peers on every indicator: grade-point average, graduation rate, ACT scores, attendance and discipline. Overall, the study demonstrated that the more they participate in music, the more positive these benefits become.

Dr Anita Collins argues that playing music allows messages to get across the brain faster through more diverse routes allowing musicians to solve problems more effectively and creatively, in both academic and social settings. Musicians also exhibit enhanced memory functions; creating, storing, and retrieving memories more quickly and efficiently. Several randomized studies of participants who showed the same levels of cognitive function and neural processing at the start, found that those who were exposed to a period of music learning showed enhancement in multiple brain areas, compared to the others.

At Ballard we see this evidence in School with musicians frequently among our top achievers at GCSE. Last year’s lead in our School musical achieved a 7 or above in all his GCSEs and it is no coincidence that many of our academic scholars are musicians. One Year 11 pupil, recently awarded ISA Young Musician of the Year, is on track to achieve an 8 or 9 in 10 GCSE subjects.

A music education is, of course, about so much more than improved GCSE results and high “value-added” scores. Our Young Musician of the Year runs our Celtic harp club where she mentors younger pupils; our Senior Prefect Team were all involved in our last musical – Singin’ in the Rain. Our musicians are happy pupils. They are busy and focused, carrying the positive benefits of their musical activities back into the classroom with them. This part of their School experience has such a great and positive impact on their education as a whole that many will choose to return to Ballard after they have left to continue to be involved in the Music Department.

Beyond all the benefits highlighted by researchers, music offers so much more, not least the opportunities for pupils to grow and shine. Ballard’s open door policy means pupils get comfortable with performing. In Year 5 a shy pupil was recognised as having a metronomic sense of pulse. It took four years of perseverance before he agreed to drum. Within two months he was performing in concerts and then joined the music tour to Tuscany. This summer music tour highlighted not only the joy of performing, but team-work, discipline, commitment and camaraderie; key life skills.

“They taught us to work together as a team to get the job done. We had three concerts which we all helped set up and pack down… everyone wanted to help. The best experience I have had… I would do anything to do it again.” (Pupil)