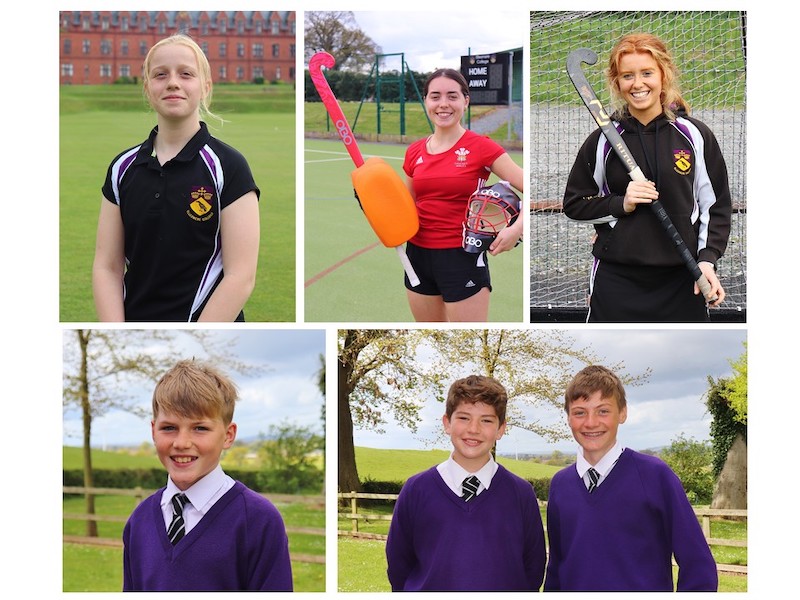 Five students at Ellesmere College are the latest in a long line of young players to come through the school’s revered hockey programme - benefitting from the guidance of College High Performance Hockey Coach Simon Taylor and his team.

Henry Dawson, 12, Finn Leonard, Alex Popplewell and Isabella Moore, all 13, Millie Foster, 17, and Alanah O’Brien, 18, have all made an important step on the path to fulfilling their dreams of playing hockey at the highest level.

Goalkeeper Alanah, who has earned a place at Durham University, has already represented Wales and will be attending the Welsh U23 training squad camp and has been selected to play for the Welsh U19 team in the Home Nations Games this summer.

Isabella plays for Staffordshire region, North Staffordshire Club side and the Mercier Marauders and has been chosen for the team’s England Hockey National Cup game, while Finn, Alex and Henry, who play for Deeside Ramblers, took part in the UK Lions selection programme.

All three players had a fantastic tournament and Finn has gone through to play for the lions squad after scoring eight goals in the tournament.

UK Lions Hockey selection offers the opportunity to play top quality competition matches at home and abroad with the objective of offering exceptional life-long experiences through playing hockey. Many youngsters who have benefitted from the programme had gone on to represent their country at junior and full international level.

Ellesmere College Coach Simon Taylor said: “I am so proud of all of our players. They have relished the opportunity to play for the U13 UK Lions in the Tensworth squad and to be selected is a huge achievement for Finn!

“It’s an excellent opportunity for them to develop their skills and experience and help them reach the next level.

“Alanah has already achieved so much in the sport and is competing with the best Welsh players for international team selection. I am excited for her bright future and we are proud that her hockey at Ellesmere has been such a strong building block for her future.

“Isabella is getting the chance to play for her club at a very high level and has relished the support and mentoring that Alanah and the team have given her at the College.

“All six players have worked very hard and have benefitted from the exceptional High Performance Hockey Programme we have at Ellesmere College and we are extremely proud of their commitment, dedication and achievements.

“Many of our players have gone on to play at the highest level – following in the footsteps of players such as Caro and Lottie Hulme at the Commonwealth Games and Ellen and Georgie Dawson in the National League. They are all a testament to the ongoing success of Ellesmere College as a centre of hockey excellence.”