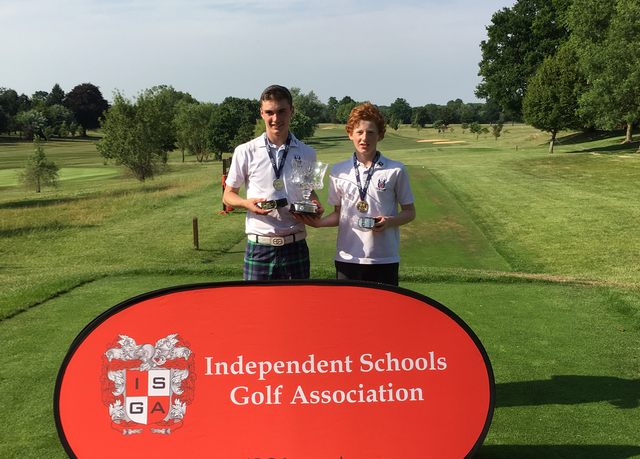 Merchiston is steeped in sporting excellence and the impressive achievements of the Golf Academy’s Junior Team have only added to the School’s rich sporting tapestry. The Golf Academy has been ranked No.1 in the UK by the ISGA, for the third year running, with the team collecting its trophy after the final win of the season at the prestigious ISGA Junior Open at Radley College.

Not only has the Golf Academy secured number one Junior Ranking Golf School for the third year in a row, but also two Merchiston pupils have been officially ranked as the top five UK Junior Players. Cameron A (S2) was crowned number one Junior National Individual Ranked Player for 2017 and Lyle M (S1) came in fourth.

Director of the Golf Academy, Alan Murdoch, commented: “I am an extremely proud coach who has been very fortunate to work with such a super group of young golfers during my time at Merchiston. As you can see, we have maintained the number one position since 2014.”

The Golf Academy at Merchiston has truly established itself as a premier school for preparing pupils for the next step in their professional careers. The golf programme offers a completely customized approach that is implemented to cater for the specific needs of each individual player, utilising the latest training methods and techniques. Combining all aspects of training, coaching, a comprehensive match and tournament schedule and individualized conditioning and performance training, we have a proven track record in helping pupils to vastly improve all areas of their game. The School has considerable experience with helping pupils prepare their applications for Scholarships in the US.

The ISGA league table can be found here. Please click here for more information on The Golf Academy.

Merchiston prides itself on fostering the pursuit of excellence in a sport-for-all environment. In 2016/17, there were 73 different teams, of all abilities, playing competitive fixtures across 16 sports; a total of 539 fixtures, with a win ratio of 56%. More impressive is that 89% of all pupils, from 7–18, represented the School at some stage.

The School is currently represented nationally and internationally in many sports, such as athletics, cricket, golf, rugby and target shooting. It has also achieved Scottish honours in tennis, rugby and clay pigeon shooting in the last three years. The Tennis Academy is ranked number two World Tennis School, ISF 2017; the Golf Academy is ranked number one UK Junior Ranking School, ISGA 2016/17.