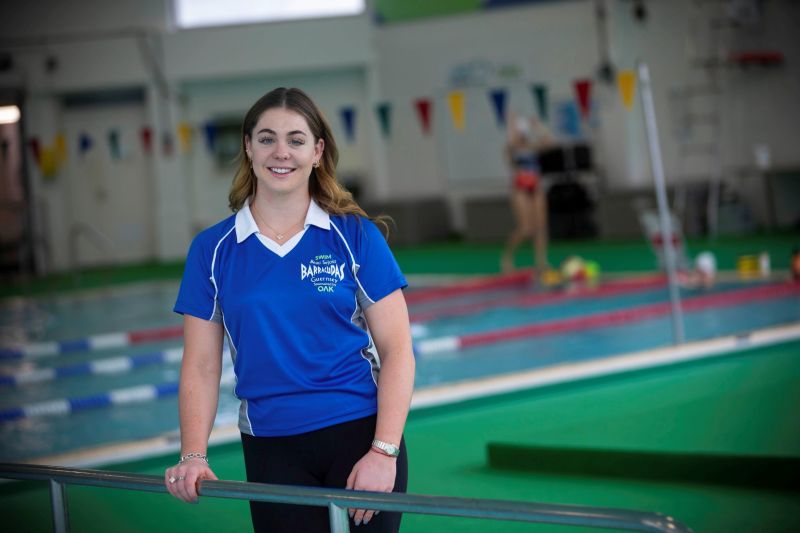 Millfield Upper Sixth swimmer Tatiana Tostevin from Guernsey has been named Young Sportsperson of the Year at the Guernsey Sports Commission Sporting Achievement Awards. The teenager was nominated after her success in Portugal at the Arena Lisbon international Meet after setting two new Island records in 100m backstroke.

Tatiana’s award follows her recent selection for the Swim England National Junior Squad for the 2020-21 season (100m Backstroke), as well as a history-making call up as the youngest ever sportsperson to the Guernsey national squad for the 2018 Commonwealth Games in Brisbane. Tatiana was 14 at the time.

Now 17, Tatiana is studying for three A levels in Business Studies, Physical Education and Psychology at Millfield, one of the leading independent schools in the UK. Tatiana joined Millfield in Year 9. She hopes to continue her swimming at a high level while studying Business Management at university, either in the UK or in the US.

Tatiana says, “It was a great surprise to see that I got nominated, Guernsey is full of great talents and it was great to see everyone’s achievements being shown, it’s all good competition too. To then hear I was a winner made me feel really proud and motivated for the future. Swimming at Millfield is a completely different field: the facilities, coaches and other athletes alongside me make me feel so lucky. It’s great to be able to constantly be training with really high-standard swimmers that are friends in and out of the pool, we all help and motivate each other through sets and celebrate each other’s achievements together.”

Millfield Swimming is recognised as one of the top clubs in Great Britain. The team includes six full time coaches, led by Director of Swimming and former Olympian, Euan Dale. Millfield is equipped with the most impressive training facilities of any school in the country, with a 50m Olympic pool built to FINA/AASA standards.

The school has produced 24 Olympians in its short history and has had a swimmer at every Olympic Games since 1968 including champions like Duncan Goodhew, Mark Foster and most recently, James Guy.