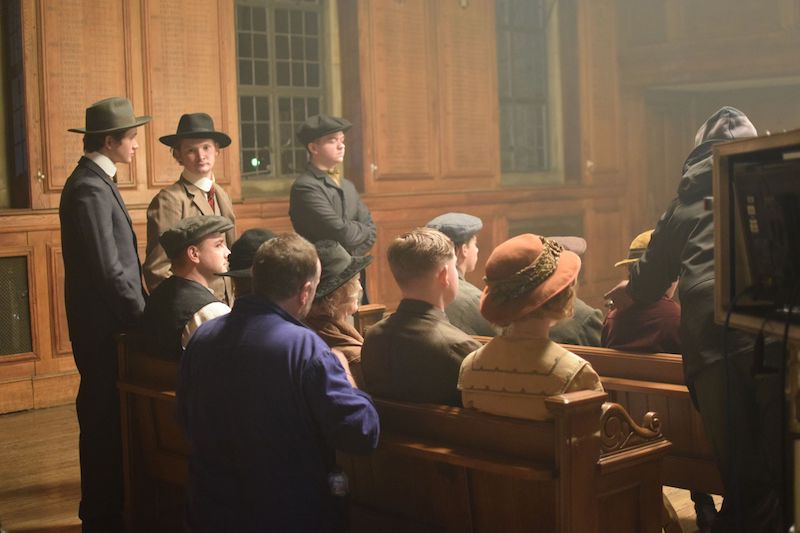 Pocklington School was used as a film location by production company Five Fifty Five Productions Ltd. over the Christmas holidays, following an enquiry from former student George Jibson. George is now the Production Manager for a new docu-drama the company is working on, named Hellfighters.

The team of actors, crew and production staff used the School’s dining hall for a day as the base for wardrobe, make up, production planning and stunt rehearsals, in preparation for filming scenes both in and outside the Music School. A number of Pocklington School pupils and local residents took part in the day too, as film extras and observers.

Hellfighters, tells the true story of the African American WWI soldier unit who went to the Front Line, amongst their many heroic acts, and also introduced jazz music to France. George and his colleagues have already filmed interviews with General Colin Powell and Grammy nominated artist John Batiste for the film, and the scenes shot at Pocklington School will form part of the series of reconstructions of the experiences of the ‘Hellfighters’.

George said: “The narrative reconstructions are a key part of the overall film and when we were considering locations to use, I immediately thought of the Music School at Pocklington School for one of the scenes. It also seemed especially relevant considering the School’s history and association with William Wilberforce, and when I approached the School they were very keen to help.

The cast and crew had the most wonderful time in Pocklington and we were all extremely grateful to the staff at Pocklington School who were so helpful during the filming. The producer is very keen to return to Pocklington School to hold a preview screening once the film is finished.”

Janet Knott, Deputy Bursar, Pocklington School said: “It was a pleasure to welcome George back to School and to be part of this film production. The cast and crew were all a pleasure to work with and our Premises Team did a fantastic job of accommodating their requirements for the shoot. We now look forward to seeing the finished film and wish George and the team the best of luck for the next stages of production.”

For information about the film project visit www.hellfightersfilm.com