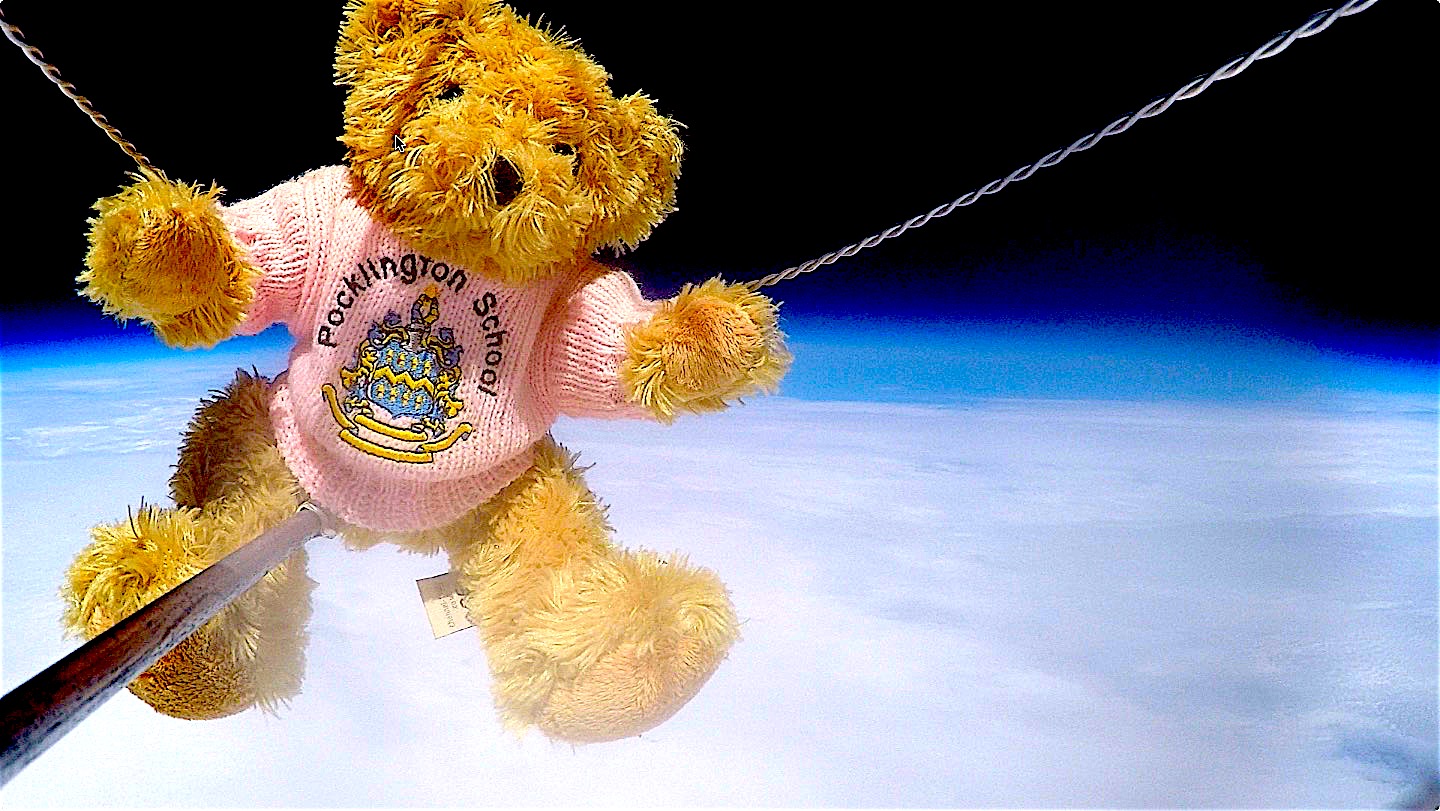 A teddy bear blasted into space by pupils at Pocklington Prep School has returned home battered – but with some thrilling footage from his adventure into the stratosphere.

The bear, known as Major William Wilberforce, soared 36km (22 miles) above Earth beneath a helium weather balloon, before plummeting back down at an initial acceleration of 9.81m (32 feet) per second once the balloon had burst.

The school has used remarkable footage from Major William’s onboard selfie cam to make a short film of his heroic journey, noting the equivalent heights of various landmarks passed during his 108-minute ascent and giving pupils some thrilling views of Earth from above.

Fortunately for Major William, his ignominious crash back down to Earth in a barley field 16 miles away from the launch site, and his subsequent tussle with a combine harvester, wasn’t captured by the camera.

A failure in his GPS tracking system meant he lay unnoticed in a field in Raywell, west of Hull, for 50 days, until being spotted by farmer Richard Thompson, who happens to be a former Pocklington School pupil.

Mr Thompson said: “I spotted the little teddy bear and his parachute as I was about to go over it with the combine. When I read the labels and realized he was from my old school, it was quite a surprise.

“I’m glad he landed in my field because he could easily have landed somewhere inaccessible and never been seen again. I was pleased to be able to get him back to the school.”

Major William lost a leg during his adventure and literally had the stuffing knocked out of him, but a visit to a 'teddy doctor' and the delivery of a bespoke crutch patched him up, and he’s now looking forward to his next adventure.

Patrick Allen, Pocklington Prep School’s Head of ICT and 'Mission Controller', documented Major William’s adventure in SPACEBEAR The Movie, a gripping 13-minute account of the mission, which began in June.

He said: “Our pupils were so excited to hear Major William had survived to tell the tale. We had a worrying few weeks when transmission was lost, so there was huge relief that he, and his footage, survived.

“The space project has inspired real enthusiasm in the children. They were involved in every step of the mission’s preparation and to see it come to fruition so successfully is invaluable educationally."

Major William himself has been inspired by the triumphs of Paralympians and will not let his disability hold him back. He already has his sights set on flying in a glider, swimming with sharks and abseiling.

You can watch 'SPACEBEAR - the Movie' here: