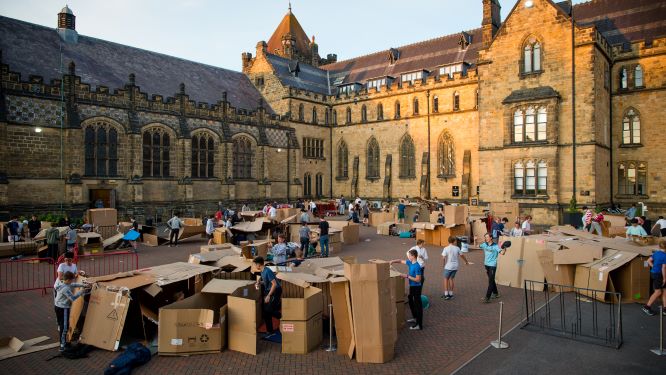 Tonbridge’s latest ‘Sleepout’ has broken the School’s previous fundraising records and raised more than £18,000 for Porchlight, a charity which supports homeless and vulnerable young people in Kent.

More than 160 First Year boys, along with several staff, built cardboard shelters and spent the night sleeping rough in the Quad on Tuesday 8 June. As well as raising vital funds, the event also educates boys about the various social issues that can lead to homelessness.

The Sleepout has been running annually for more than 12 years. Since 2011, Tonbridge has been working with Porchlight and in this time the School has raised over £100,000 for the cause, making it the charity’s largest individual donor.

For the first time, this year’s Sleepout led directly to Field Day on Wednesday (9 June). Instead of returning to their houses in the morning, boys had to experience the reality of tackling a day’s activities without basic facilities such as showers or clean clothes, which provided a further experience of how it may feel to be without a home.

Tuesday evening saw shelters constructed in the School Quad as the sun set, with boys under strict instructions to build in their house groups and maintain their own Covid-secure shelters.

The boys heard more about the vital work of Porchlight and the profound effect that the pandemic has had on the homeless of Kent. They also learned that Kent has the highest rates of homeless women of any area of the UK.

A light-hearted competition, judged by Porchlight, awarded prizes to boys who constructed the most efficient shelters or made artistic improvements to their basic boxes.

Those taking part in the Sleepout were fed from a soup kitchen, run by Lower Sixth volunteers, and then tried to sleep, some rather unsuccessfully. The cardboard was later loaded into a recycling lorry.

For Field Day, boys were each given a ‘character’ to play for the day: based on real life stories of those supported by Porchlight, each character had their own backstory and history, many of which made for challenging reading.

Tired as they were, boys were set a series of tasks throughout the morning, which were designed to bring home to them the unfair start many have in life and the reasons behind routes into homelessness.

A workshop in which they were asked to draw a homeless person, for instance, investigated preconceived ideas about those we see on the street. Team challenges with the theme of ‘Life Isn’t Fair’ included a race where boys’ varied starting positions were determined by a series of apparently random questions, and a task to move water between buckets, where some teams had pint glasses and others had small cups with holes in them.

Finally, boys had to complete a housing benefit application form and even draw up a budget for running a flat when living on universal credit, a task made trickier as phones had been taken away and they had to rely on mental maths rather than calculators.

Juliet Burnett, the School’s Community Action Manager, said: “In linking the Sleepout to Field Day, all involved gained a much greater insight into the exhaustion of trying to function after even one night of rough sleeping, and the associated challenges faced by the homeless.

“All went home reflecting on their experiences and on the vital role that Porchlight plays in turning around the lives of those they support.”