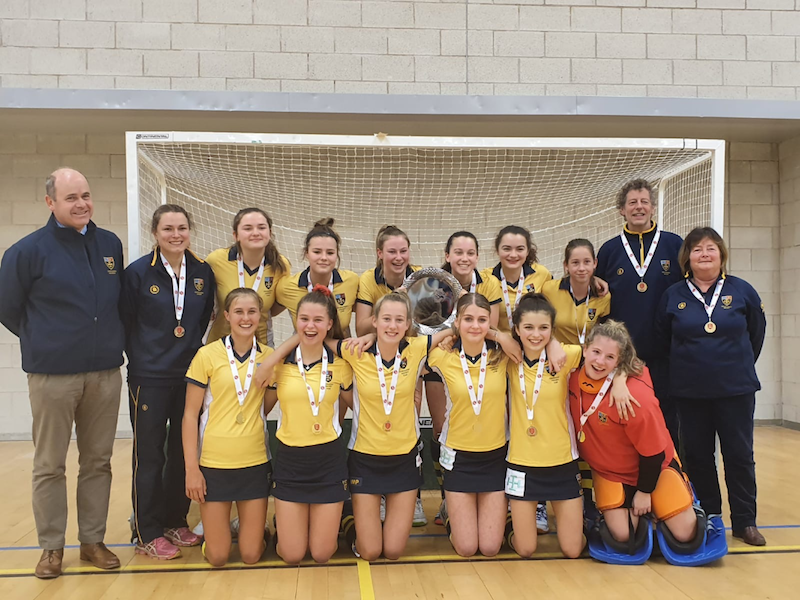 Over the weekend the U16 girls became National Champions with a win over a talented Repton team on penalty flicks after drawing in normal time – an almost exact repeat of last year’s final.

Their pool started with a difficult game against Millfield. Having the majority of the possession, Cranleigh created a number of chances from the start and took the lead after just four minutes with a tight shot from Boau-Lilly Shepherd. A penalty stroke was then excellently saved by their keeper. Chances continued to come but with 30 seconds of the first half left Millfield got into our D for the first time and scored. Midway through the second half with only their second incursion they scored again, but two short corners from Mattie Hamilton in the space of a minute turned the game and we ran out 3-2 winners.

Our second pool game was against our big rivals Repton. A close tactical game ensued in which they had more possession but struggled to create lots of clear chances. When they did Liv Barker was outstanding. Repton scored a minute before half time and 30 seconds before the end as we pushed forward for the equaliser. This was clearly a tough game but everyone in the squad got on the pitch, and there were some great tackles from the likes of Immi Pilling and India Scott in particular.

We therefore had to win our final two pool games on Sunday to qualify for the semis. It was going to be essential that, with four games during the day including three games with only a one game break between them, we had the whole squad. The Perse made it difficult for us, but Liv Martin opened the scoring early on and Mattie Hamilton doubled our lead from a short corner halfway through the second half. Although they got one back, we scored another short to complete a 3-1 win.

Many hours later, we played Queens Chester. Once again Boau-Lilly scored early followed by two from Eliza Wheeler and one from Georgie Lawes, so we were four up at half-time. We had already started rotating subs and we continued to play excellent indoor hockey with Sasha Pilling controlling things from left defender, and some nice passing down the right board involving Ruby Bailey and Millie Charnock coming to meet the passes. We added another two goals in the second half and although they scored three, we finished with a comfortable 6-3 victory.

Just one game off and a semi against our local rivals St Teresa’s with their three England players. We had a specific plan to restrict their distribution from the back and they struggled to get the ball to their midfield and dangerous forwards. Siena Keijsers scored two short corners in the first half to give us a 2-0 half-time lead, and completed her hat trick between two successful short corners of St Teresa’s. At 3-2 it was very tight now. A minute before time Boau-Lilly scored a deft deflection in front of the keeper to seal the victory.

So we faced Repton in the final – a repeat of last year. Once again a new defensive system that saw a mix of man-to-man on their top two players and zonal for the other three. Siena occupied their England player as she had done in the pool match, whilst Boau-Lilly and Georgie marked their German international. It was a quality game of indoor hockey – cat and mouse. They took the lead just before half time with a well worked short corner. We applied more pressure in the second half and were rewarded with our own short corner converted by Mattie. They then piled on lots of pressure resulting in many short corners – they had eight compared to our two by the end! But we held out with Liv Martin running down one, Eliza clearing off the line, and right at the death they hit the outside of the post.

So, two strokes; just like last year and they scored their first, although Liv Barker got an arm to it. Mattie then stepped up and scored bottom right. Liv then saved their next, and Siena scored bottom left. Their third stroke was fired just wide to give us the trophy for the second year running.

Richard Organ concluded “Just as we discussed at the start of Sunday, the critical advantage would be that our squad was stronger than anyone else’s and this would be the deciding factor with four games on the day and three of them very close together… and so it proved to be. I’m very proud of the whole group who have become the first Cranleigh hockey team to retain their National title.” 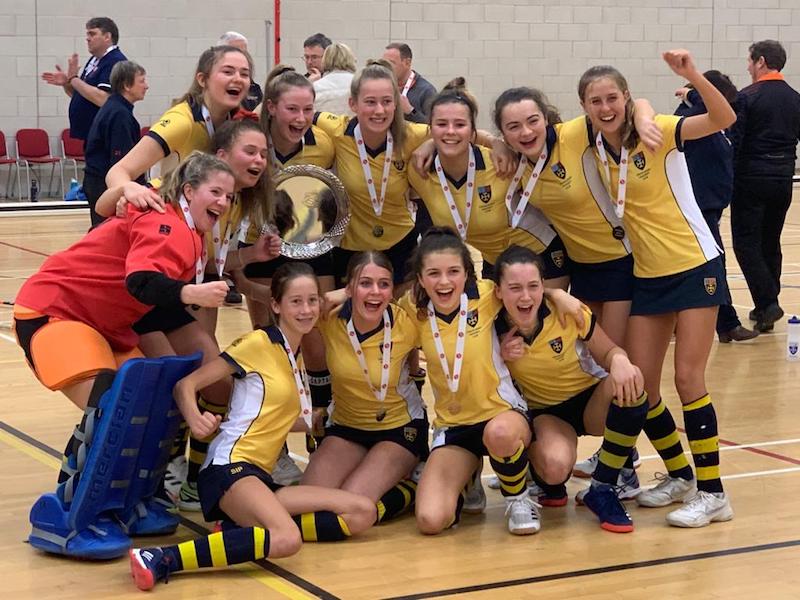