An Ellesmere College pupil has won a national golf event - the first to do so since the school’s Golf Academy was launched.

In addition the Ellesmere College Golf Academy team came an impressive third overall, with 17-year-old Marcus Wildblood and Charlie Boys, 15, competing with the twins. It means the school is now ranked fourth in England for golf.

He commented: “We were up against all the schools that have golf academies or play golf from around Great Britain so it was a great achievement to finish a very impressive third in the team competition, but also to have the winner and bronze medal places in the individual event. It is a proud moment for the school - I believe this is the first time one of our academy has won a National event and this will help us gain momentum for the future.

“Over the past few years the Academy has gone from strength to strength and we are building on each success with a lot of interest from new pupils each year. We have introduced new disciplines, a player development pathway and compete in as many events on as many different golf courses as we can. Of course, we give equal weighting to academia too, so the students get the best of both worlds.

“We are a real force to compete with now, making the most of our facilities such as the indoor SkyTrak Golf Simulator and nine hole GONGU rated golf course we have here at the school.”

Rob, who also happens to be Jonjo and Charlie’s dad, said he was very proud on a personal level too. “I am, of course, very proud. There’s great competition between Jonjo and Charlie and they really spur each other on. It’s a great achievement for them both and everyone around school is congratulating them now.” 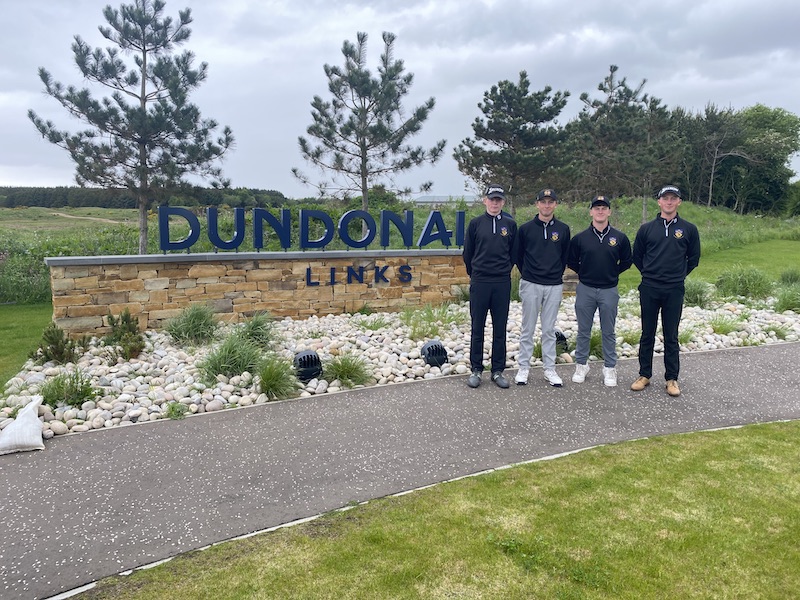 The team qualified for the three day competition at Dundonald Links by winning at Preston Golf Club and then at the English final at Carden Park, Cheshire.

Some Golf Academy members are also part of the Regional Development England Squad and in June six pupils will head to Warwickshire to compete in their next competition.

For more information about the Golf Academy at Ellesmere College please visit www.ellesmere.com.