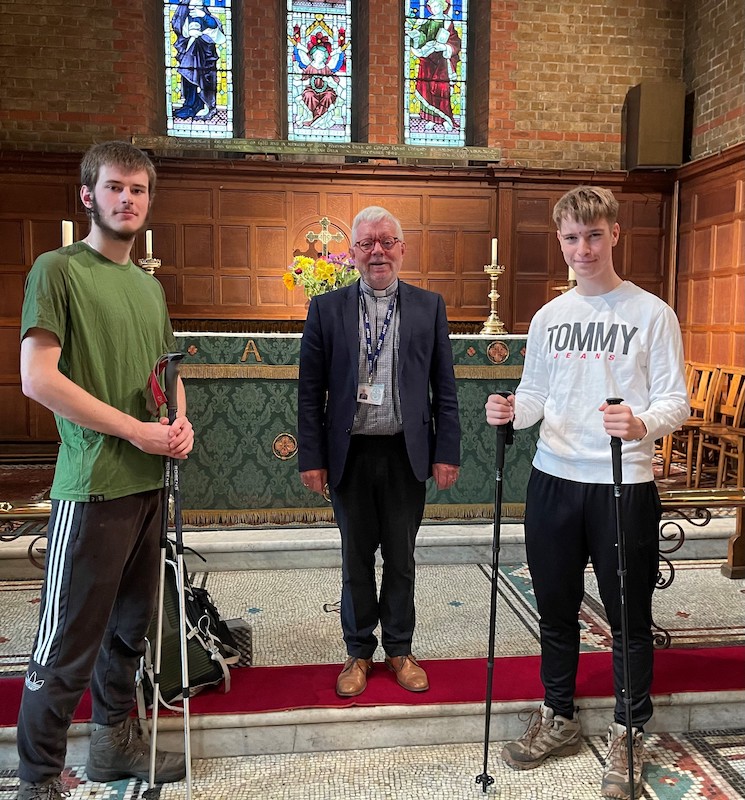 Spurning the lure of beaches, nightclubs and festivals as a celebration of the end of their A Levels, two Sixth Form students at Gordon’s are embarking on the challenge of the Via Francigena, a 1,900km pilgrimage from Canterbury to Rome via the Alps!

Isaac Johnson and Daniel Drakeford, who have shared a study room at Gordon’s for the past two years, decided in January that they would attempt the walk along the historic UNESCO trail. Since then they have used every opportunity between revising to train for it.

The daring duo had planned an epic journey last year, to carry out charity work in Bolivia or the Phillippines, but the COVID pandemic scuppered their plans. So this year, they opted for what they hope will be a more physical, less expensive challenge.

Dan explained: “In late January we agreed on it and within a week I had most of the stuff needed!”

However Isaac was more cautious: “I was thinking it might be a bit presumptuous to buy it all. We went on a practice walk and naturally massively overdid it and could hardly walk the next day. It was a very tough first walk. Now we have reached the point when we could walk for two hours without realising we have set off!”

“Not many people thought that we were actually doing it. They thought we were joking about the whole thing,” laughed Dan.

Isaac added: “There were people at the beginning that wanted to do this with us but they seem to have dropped out!”

They will follow the pilgrim’s route, through England, France, Switzerland and along the recently opened Great St Bernard Pass before entering Italy. While they are hoping to stay in churches and hostels where possible, to keep costs down, they are taking a tarpaulin to sleep under and have allowed themselves the luxury of sleeping bags and roll mats.

They will also be taking advantage of the pilgrim’s discounts on meals offered In Italy, for instance.

The pair have trekked almost 200 miles since February to practise for their epic journey, filling their rucksacks with rocks to get used to what will be the weight of their clothes, sleeping bag and the tarpaulin they will sleep under. Between them, they have also been learning Italian, French and German to help their progress through each country.

Isaac is in charge of navigation although he modestly explained: “Almost the entire section of Italy, most of Switzerland and France is signposted because it is considered a UNESCO historic route. I’ve got a compass too though!”

Their chosen charity for the event is the Camelthorn Foundation, which is linked to Gordon’s School and is raising money to build Gordon’s House, a girls’ boarding house in Zimbabwe. (To donate to their Justgiving page, please visit: https://www.justgiving.com/crowdfunding/gordonspil...).

Gordon’s School Chaplain, the Reverend Graham Wright, blessed them at Gordon’s but the two began their journey after attending a Communion Service in Canterbury Cathedral where they were also blessed.

Around 10,000 people make the pilgrimage to the Vatican every year. Once they get to Rome they will have to visit the seven pilgrim churches there within 24 hours before heading to the Vatican where their ‘pilgrim’s passport’ will receive its last stamp.

Both are destined for university with Dan reading Maths and Isaac, who will take a gap year first, History, but they have promised to return to Gordon’s to talk about their travels, something that will spur them on in their three month walk. “We can’t come back and say we didn’t make it!” said Isaac.