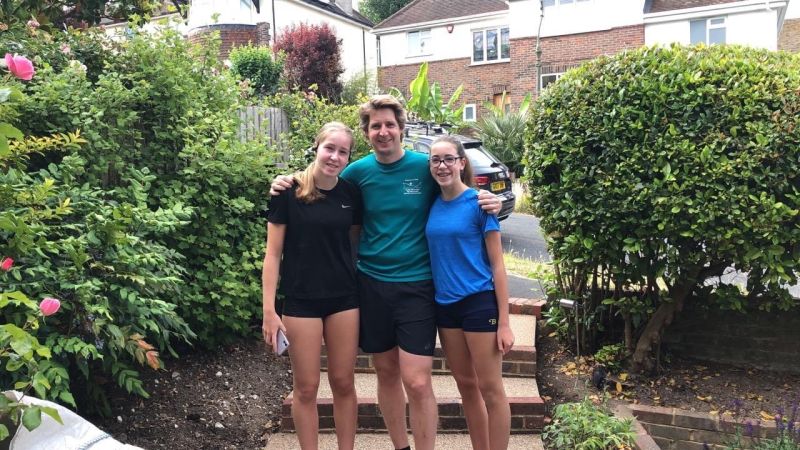 Friends Jessica Farrant, a student at Burgess Hill Girls, and Emily Shapton, a student at Uplands Community College have raised over £1,300 for Choose Love / Help Refugees by running a mile every hour for 24 hours. They met through their love of the triathlon and both girls compete for Sussex Tristars.

This month, Jessica and Emily should have been taking their GCSE exams, but due to COVID-19 the exams were cancelled. The girls decided to take on another challenge, running a mile every hour for 24 hours. Organised by Phoenix Running, ‘P24 – The Longest Day’ was a virtual running challenge held on the Summer Solstice, Saturday 20th June. It started at 8am and participants had to run a mile on the hour for the next 24 hours, finishing at 7am on Sunday 21st June.

Jessica said this was the toughest challenge she has ever completed, both physically and mentally:

“You would think that running on the hour would mean a fairly long break so it’s easier, it’s not! Between every mile your muscles fatigue and cramp. You have to motivate yourself to get back off the sofa. Eating was also challenging as there was not enough time to let our food go down so stitches were common and very painful. The night miles were the hardest as it was dark, our legs were tired and we had to try and not fall asleep, but when the sun began to rise at 4am the end was in sight!”

Jessica and Emily decided to use the challenge to raise funds for Choose Love / Help Refugees. The charity supports refugees all around the world, providing emergency aid and long-term solutions where they are most needed. Jessica and Emily have already raised over £1,300 and you can still donate via their JustGiving page.

Joining Emily and Jessica in the challenge were Jessica’s sister Sophie, another student at Burgess Hill Girls, and their Dad Paul.