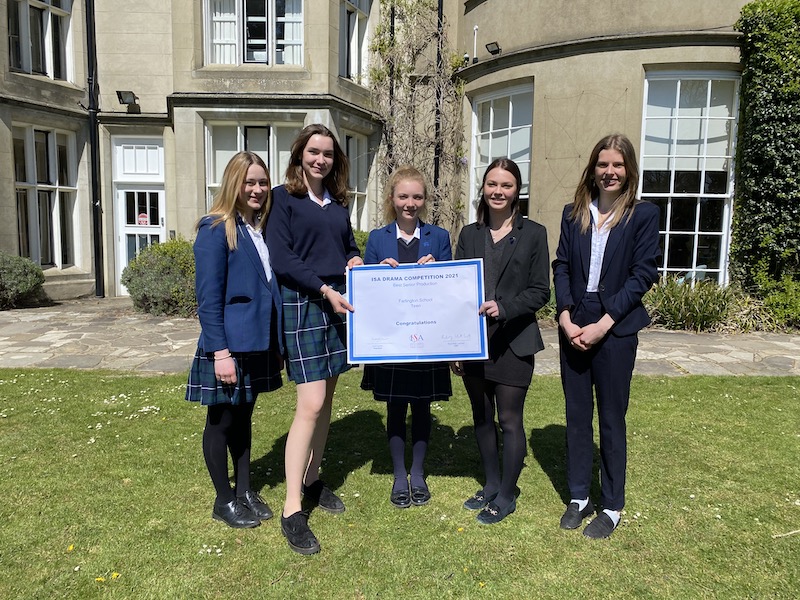 A virtual performance by Year 11 and Year 13 Drama students at Farlington School near Horsham in West Sussex has been named 'Best Senior Production' in the prestigious Independent Schools Association (ISA) Drama Competition.

It has undoubtedly been a difficult year for everyone, but for the theatre industry it’s been catastrophic, with theatres closed across the country for more than 12 months. Drama in schools has been largely put on hold too, with performances postponed and Drama lessons conducted virtually.

So when Farlington’s Head of Drama & Theatre, Emma Spires, heard about the 2021 ISA Drama Competition – to be held online for the first time due to the pandemic – she began to hatch a plan.

Knowing that Year 11 and Year 13 students Lara, Lucy, Millie, Amelia and Ellen were desperate to be back in the studio, having missed out on so many performance opportunities over the past year, Emma offered them the chance to enter the competition, which is open to ISA Members’ Schools across the country.

“I knew it would be tricky entering a recorded performance rather than performing live,”she says. “But I was certain we could do something creative and entertaining that would give the students the chance to perform and bring back some ‘drama’ to the Drama Studio.”

The students were keen to perform a short scripted piece that was serious, funny and relevant, so the search for a play began. After reading copious scripts, Emma came across TEEN, a selection of short scenes and monologues examining the social and emotional issues faced by today’s teenagers, written by Australian playwright Kristen Doherty.

“Kristen was fantastic and encouraged us to run with the play,” says Emma. “She was happy for us to interpret it in any way we wanted; that type of freedom is very rare with scripts.”

Rehearsals began shortly afterwards, with COVID restrictions making things more complicated than usual. “It was obviously necessary to keep numbers low, so in addition to the small cast we had just one person controlling sound, lighting and camera,” explains Emma. “But rather than seeing this as a problem, we embraced the challenge.”

In just three weeks, the final performance had been recorded and Emma sent it off on the last day of term before the Easter break. A nail-biting three weeks later, the winners were announced, with the Farlington performance of TEEN named 'Best Senior Production'.

“I can’t express how proud I am of these students,” says Emma. “They worked within all guidelines with no complaints, and were so creative, devising hand movements and other elements of physical theatre, and developing complex characters.

“We’re over the moon to be amongst the winners of the 2021 ISA Drama Competition, and look forward to being able to enter future competitions with live performances.”

Farlington’s thriving Drama Department has an excellent reputation, with 100% of A-Level Drama students achieving grade A over the past four years, and a 100% pass rate in Year 9 for the Bronze Arts Award. Approximately half of Year 10 and Year 11 students choose to take GCSE Drama, and in 2020, Farlington was awarded the coveted Silver Artsmark.

To watch the winning performance of TEEN, please click here. To find out more about Farlington School, please visit www.farlingtonschool.com.